Board succession and diversity

We have made good progress on further developing and documenting our arrangements for executive succession. The medium-term plans have been discussed and we have reviewed the process by which executive appointments are made. This builds on the work that we undertook in the previous year assessing each member of the Executive Committee and creating succession and development plans accordingly.

During 2020, Douglas Hurt joined the Board, bringing with him a wealth of financial and auditing experience. This has ensured that we could smoothly transition the Audit Committee responsibilities to him over the course of the year. Robert Pickering has transferred his previous responsibilities to me and retired from the Board in December 2020.

The changes that we made in 2020, combined with the appointment of Cynthia Schwalm in 2019 and other appointments in recent years, ensure that there are relatively few near-term non-executive succession requirements. The NGC will develop a new plan for the succession of independent directors over the medium term.

The NGC oversaw the development of an induction programme for Douglas Hurt. Whilst the movement restrictions arising from the pandemic have led to some in-person elements being deferred, Douglas received briefings from the auditors, Company Secretary, Chief Executive Officer, Chief Financial Officer and members of the Executive Committee. Once movement restrictions have been lifted, arrangements will be made for Douglas to visit operating facilities and hold in person discussions with relevant management.

The Board has approved Hikma’s diversity policy, which applies to the whole Group, including the Board. Hikma’s objective is to continue to ensure that it has an inclusive workplace that welcomes different cultures, perspectives, and experiences from across the globe. Hikma is committed to employing and engaging talented people, irrespective of their race, colour, religion, age, sex, sexual orientation, marital status, national origin, present or past history of mental or physical disability and any other factors not related to a person’s ability to perform the relevant role.

One of the three pillars of the Group’s strategy is to ‘inspire and enable our people’. The Group’s policy and approach to diversity, succession and appointments are a core part of this pillar. The Board monitors the diversity metrics which are detailed on page 65 and uses these as a reference point when considering the level of achievement against its diversity objective (detailed above). Hikma has successful empowerment and talent development programmes to help all employees make the most of their potential. This diversity policy is included in our Code of Conduct and communicated to all employees.

The Board considers that it has demonstrated strong ethnic diversity since the formation of Hikma and has three Directors identifying as BAME representing 30% of the Board, including the Executive Chairman. Accordingly, the Board wholeheartedly supports and adopts the Parker recommendation to have at least one Director of colour.

Since its founding, Hikma has actively promoted gender diversity across its operations. The NGC was pleased to be able to improve gender diversity in the Boardroom over the past few years, including through the recent appointment of Cynthia Schwalm. The Board has adopted the Hampton-Alexander target to achieve at least 33% female Board representation. The new medium-term succession plan will take into account the strong desire to achieve this target. 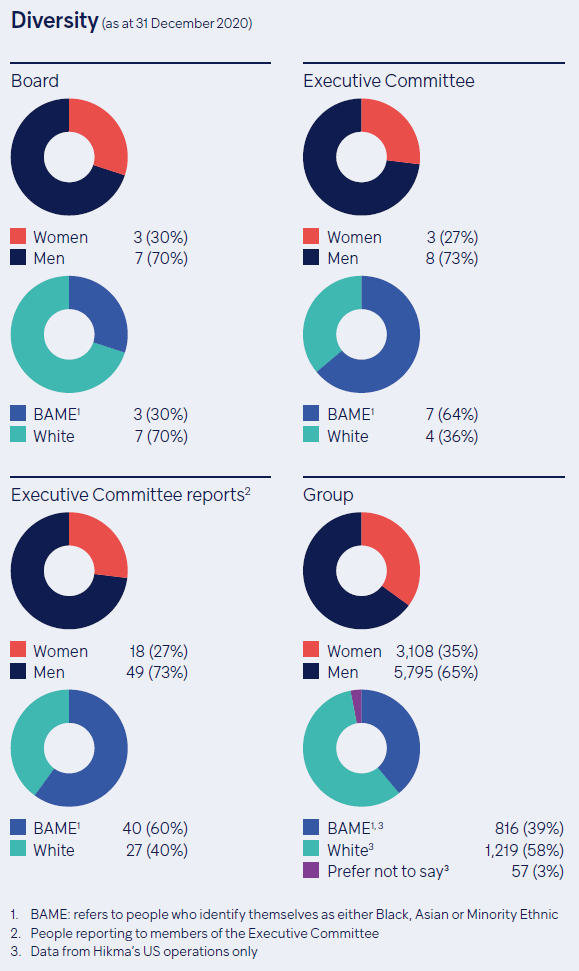 Hikma
Back to top